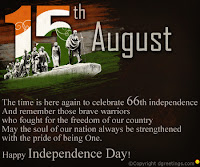 The date 15th August, 1947 has now become emblematic of freedom, independence and a shackle-free existence for every Indian. The day reminds the citizens of India of their liberty from an oppressive nation, turning into a self-ruling, peaceful democracy. Every year on the fifteenth day of August, the country flamboyantly monumentalizes the history. The president hoists the national flag jovially at the Red Fort in New Delhi, the capital of India. The Red Fort is further adorned with various cultural activities like folk dances, songs and folk-art. The tableau is indeed a reflection of the colors of India.
The pride in the Independence Day comes about with the commemoration of the struggles of the freedom fighters; they form the backbone of India. People all over the country celebrate the day with the national flag attires, sending each other greeting cards and gathering together; feeling the sense of community. Also, flying kites is yet another popular idea that runs across the nation. Flying kites together is a symbol of liberation and fraternity: the crux of an Independent nation. 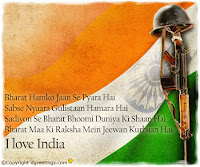 Independence Day is a phenomenal experience for every Indian. It is a reminder for the citizens of India that we have to respect, protect and obey the constitution of our country. Moreover, in this age of globalization, the patriotic sentiments are expressed through patriotic poems, e-greeting cards, blogs, and especially through social media. Our nation is growing steadfastly, but we must not forget the hardships faced by our ancestors. We can widely spread our jingoistic spirits by proliferating it among our brothers and sisters across the world.
Click here to send Away Indian Independence Day Quotes