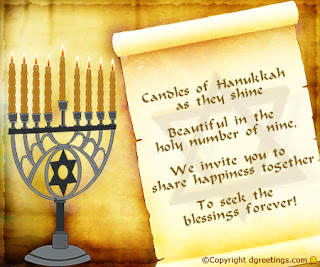 Hanukkahis one of the most popularly celebrated eight-day long festivals of the American-Jewish community. The festival is commemorated to celebrate the spirit of the re-dedication of the holy temple in Jerusalem, especially after its revolutionary desecration by some illegal Syrian-Greek forces. The festival signifies the spirit of the powerful struggle illuminating in the bosom of every Jew to live his life under the commandments and rules of the God. The festival honors the Jewish way of life and its principles which are literally treasured close to the heart by each and every member of the Jewish community presiding all over the world.

Every year, this grand festival is celebrated on the 25th day of the “Kislev” month, a Hebrew month according to the Jewish calendar. There is no one particular day for celebrating this festival as the Jewish calendar is lunar in nature. As a result, every year, the first day of the festival falls on a different day, however, between the months of November and December. Interestingly, since most of the Jewish population is well settled in Christian societies, the festivities of this grand day are more or less similar to the celebrations of Christmas.

The festival is also known as the festival of lights as the all the streets, houses and churches get enlightened with the brightness of lights and candles. In fact, one of the most unique aspects of the festival which makes it different from Christmas is the lighting of the candelabrum, a unique nine-branched Hanukiah. Since the festival is celebrated for good eight days, the Hanukiah is lit on every night of the eight-day long festival.

The festivities are not considered complete without the spinning of the traditional dreidel, a game which has four sides and Hebrew letters written on each of the sides. Essentially, as per the rules of the games, the letters need to be moved in a way that every turn culminates into a meaningful word. The game is appropriate for playing for both adults as well as children of all the age groups. It is believed that even babies are made part of the game as they utterly enjoy the moving of the spin around its axis.

For the children, Hanukkah holds special importance because of the fun element related to the festival. Apart from playing the Dreidel game, the children get an opportunity to relish the traditional latkes, also known as the potato pancakes and donuts, traditionally called the Sufganiyot. Special books, dedicated on the history and evolution of the festival are published for the children. These books are popularly called the Hanukkah books and are read among children, under the guidance of the adults.

More typically, the festival is celebrated among the family members united together. The festivities are enjoyed with near and dear ones, savouring the customary fried foods, especially the Latkes and donuts.  However, the relatives who are settled in far lands and are unreachable are popularly greeted with the Hanukkah photo cards which carry inspiring messages about the festival.