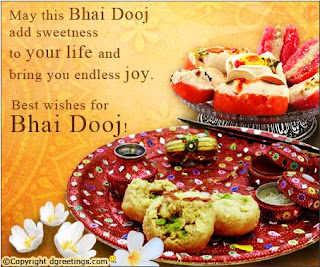 Bhai Dooj is celebrated all over the country to revere the sanctity of the bond shared between a brother and a sister. The day is celebrated as a grand festival and reminds us about the glorious relationship of a brother and his sister. Bhai dooj is signified by the umpteen prayers offered by the sisters to the almighty for bestowing well-being and healthy life to their brothers.  The festivities of this day are mostly observed by the Hindus all over the world.  The day falls on the last of the Diwali celebrations. Going by the Hindu calendar, Bhai Dooj coincides with the second day of the Shukla Paksha, better known as the fortnight of the month of Kartika.

According to the legendary stories, decades ago, the much feared God of death, The Yamraj, paid a visit to his sister Yami, on this auspicious day of Bhai Dooj. Yami welcomed his brother with a beautiful garland and smeared a spiritual tilak on his forehead. She also served him with sumptuous dishes and sweets. Both the brother and his sister enjoyed the dishes to core. Out of his love and affection for his sister, the Lord Yamraj vowed to protect all those men who received the auspicious mark ( tilak) on their forehead. Ever since, the day holds immense significance in the Hindu culture and is celebrated with much fan-fare and dedication by the brothers and sisters.

The day signifies an eternal bond of love between the brother and his sister. Bhai Dooj is form of a ceremony wherein the dutiful brother vows to protect his sister and stand by her pillar-strong in times of difficulties or need. The sister in turn, shows respect and affection for her brother by welcoming him whole-heartedly, cooking great meals for him and smearing his forehead with the auspicious mark.  With the tikka ceremony, the sister offers her sincerest prayers to God for his protection and a healthy, fun-filled life.

The festival is also known by the name Bhai Bij in states like Haryana, Goa, Maharashtra and Gujarat. To add more charm and zeal to this festival, various innovative ceremonies are performed on this day, one of the most important being, exchange of gifts. The sisters shop for their brother’s favorite sweets whereas the brothers gift shopping coupons to the sisters.

Thanks to the technology, those who are far away can greet each other via e-cards, affectionate messages over emails and not to forget, the virtual tilaks!